A Guide to Diamonds & Tanzanite 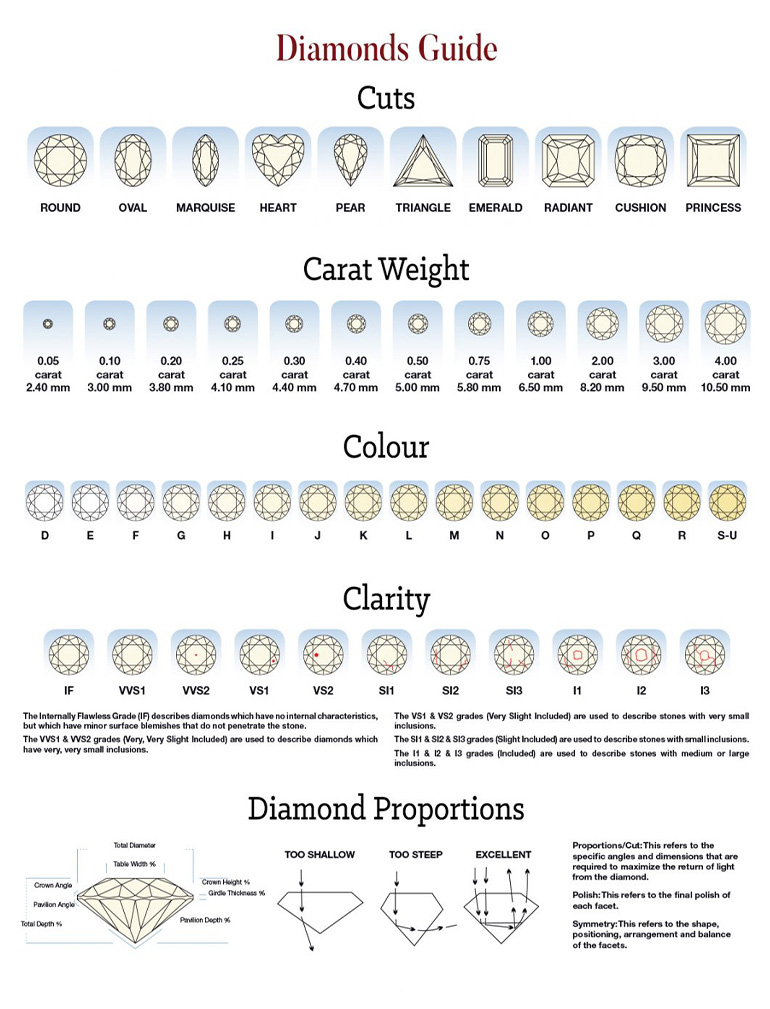 The Diamond Trading Company, which historically controlled the world’s diamond supply, is not only famous for the expression a ‘Diamond is Forever’, but also for developing the 4 Cs method of evaluating diamonds. The 4 Cs: Colour, Clarity, Cut and Carat (weight), are fundamentals that determine the value and quality of a diamond.

The 4 Cs will help to guide your decision but it is important to remember that when it comes to understanding the quality of diamonds, even experts find it difficult. For example, a big diamond is not always more valuable than a smaller stone, a small but well-cut diamond of perfect colour and flawless clarity will be far more valuable than a much larger stone with visible impurities and a slight yellow tinge.

It takes a lifetime of experience to really know your diamonds, which is why Diamond Jewellery International has a team of specialists with years of experience. We only sell high-quality diamonds and will expertly guide you through the process. All stones are directly sourced from the world’s top diamond cutting centres. By cutting out the middleman, we promise to deliver real value to you. We will help you to learn and understand this all before you even think of buying.

The beautiful African legend lives on

Masai cattle herders from East Africa first noticed this incredible gemstone some 40 years ago.  After having put out a fire, which had been burning all night to ward off wild animals, they noticed that the brown zoisite crystals had turned a deep blue-purple from the heat.

Today, the Tanzanian Mining Ministry recognises a miner named Ndugue Jananne Ngoma as the person who discovered Tanzanite. A gemstone created by the transformation of zoisite under extreme heat and pressure caused by the movement of the earth’s crust in the formation of the Rift Valley.

The mineral zoisite is a fairly common reddish brown stone found throughout the world but blue zoisite or Tanzanite is extremely rare – and actually 1 000 times rarer than diamonds. The reason for this is that during crystallisation, the element vanadium attaches itself to the common zoisite. Vanadium is normally found very deep in the magma of the earth but with volcanic activity and the movement of tectonic plates, zoisite and vanadium are brought to the surface simultaneously, creating a unique gemstone that we now call Tanzanite.

There is only one Tanzanite mine in the world, situated in the Merelani Hills near a small town called Arusha in Tanzania. The mine is at the base of an extinct stratovolcano, the largest mountain in Africa, and one of the largest freestanding mountains in the world, Mount Kilimanjaro. The name “Tanzanite” originated from its country of origin “Tanzania” and was officially appointed by gemologists at Tiffany & Co. in Manhattan, New York.

Even though Tanzanite is tri chloric and ranges from blue to violet and a red to green, it is best selected on true depth of colour. The unique shape of the stone is also a strong influence and larger pieces are becoming increasingly rare.

The world’s largest faceted tanzanite is 737.81 carats and one of the most famous large tanzanites (242 carats) is the “Queen of Kilimanjaro”. It is set in a tiara and accented with 803 brilliant cut tsavorite garnets and 913 brilliant cut diamonds. 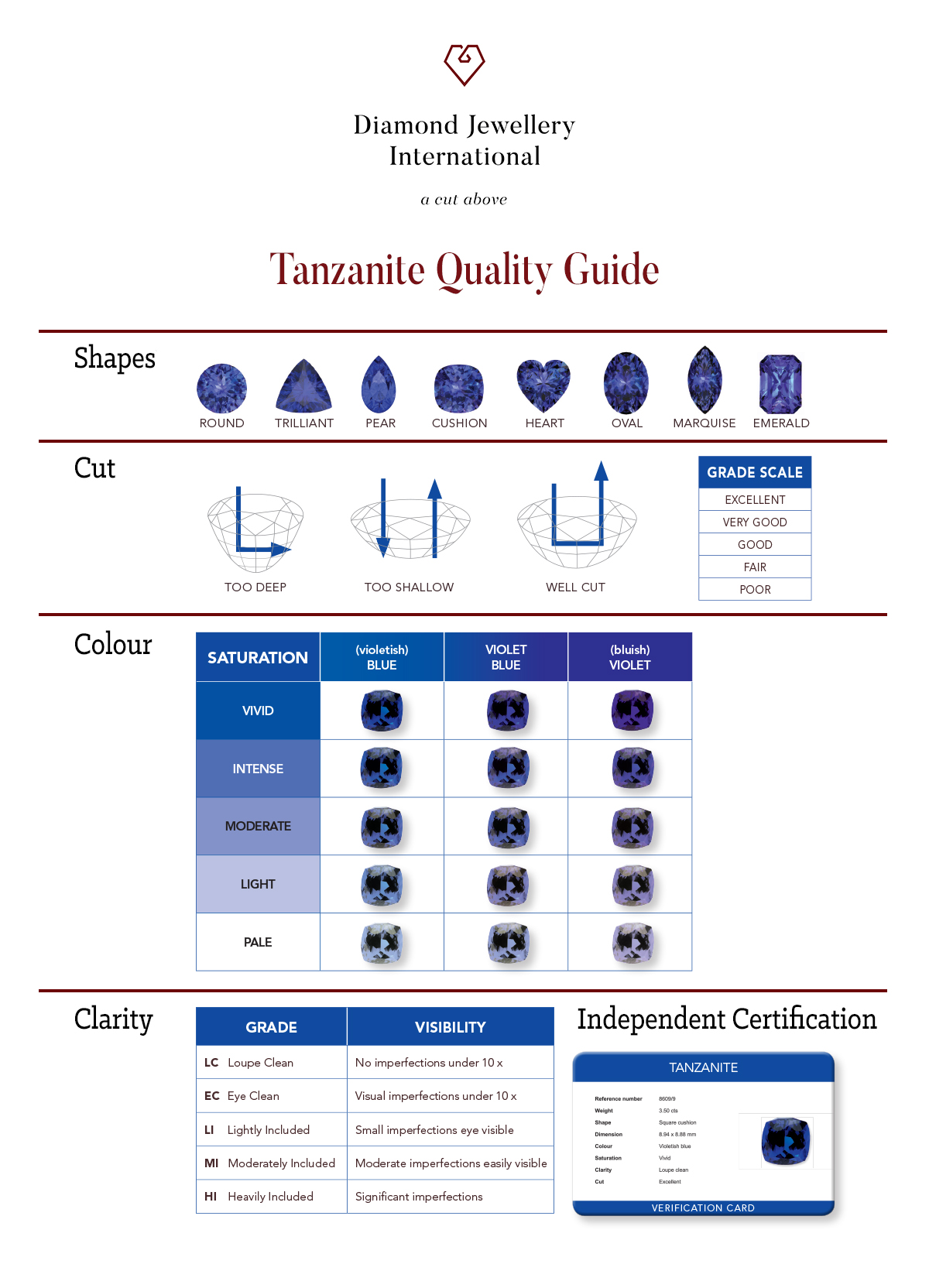 The strength or intensity of the colour.

The imperfections that may occur in the stone:

The final polish, symmetry and external characteristics of the stone:

Offering a ring as a marriage proposal is an age-old tradition. This special ring is a pledge: a declaration of love and a lifelong commitment. More rings are bought to mark an engagement than any other occasion.

Asking someone’s hand in marriage is not only one of life’s most important moments but it can also be very daunting. At Diamond Jewellery International we understand this, and want to make the purchase of an engagement ring as special and memorable as possible. We value our relationships with our clients and will walk you through every step of the purchase journey.

We also understand value and ensure that you are guaranteed the best quality for the right price. When it comes to an engagement ring, you want to know that you have the finest product, source, design and workmanship. With us you can rest assured that:

We would like to thank you so much for the most amazing service you gave us when designing our beautiful new rings. We were so impressed with how you carefully listened to what we wanted and your talent in executing the design. It was truly an amazing experience.
- Andrew & Helen
I have had made jewellery made in the past but never had such a pleasing result. Thank you from the bottom of my heart for finding me the most beautiful, special tanzanite and I can’t get over how little I paid. I really shopped around beforehand. When I saw it I could not believe it!!!
Love Gail
From the time we set foot into your amazing premises until delivery today, you made us feel like royalty. My new tennis bracelet is exactly what I wanted and the custom job fits me perfectly. So from the Marz’s, a giant hug to you and your team!
I am in love with my gorgeous new engagement ring. Thank you again for your professional, prompt and extremely friendly service. Thanks for hand delivering my ring. You clearly love what you do and know how to make clients feel so special.
Margaret
Just a short note to let the Diamond Jewellery International team know how impressed myself and Wim are with your range, showrooms and factory. We have never seen anything quite like it, even on our travels. We love our new jewellery and can’t thank you all enough. Can’t wait to show it off!
Facebook-f
Instagram

Ever since the Middle Ages, Father’s Day has bee

These Tungsten Ring are the perfect gift for him.

Jewellery has the power to be the one little thing

Have you ever found yourself imagining and dreamin

Jewellery will never go out of style. No matter th